Mushroomhead is on tour with Erimha, Unsaid Fate, and Thira. The Castle Theatre is one of the most intimate venues in the Midwest. When you see a show here, you are always up close and have a great view.

Local band PREY For US from Peoria, Illinois started the evening and had a solid set. The band was certainly trying to engage the crowd by asking them if they were having enough to drink. The singer was also trying to get some movement from the crowd. The crowd seemed to have planted their feet or were saving their energy for MRH.

Thira took the stage next. They are an industrial metal band based out of Minneapolis, Minnesota. The name Thira originates from an island off of Greece. The band’s costumes consisted of steam punk jackets, hats, and goggles. Their sound is industrial heavy metal and with two heavy vocalists.  The music kept coming hard. They performed songs off their album Vein 1: Varying States of Decay.  Watch for our interview with Kayden of Thira band. 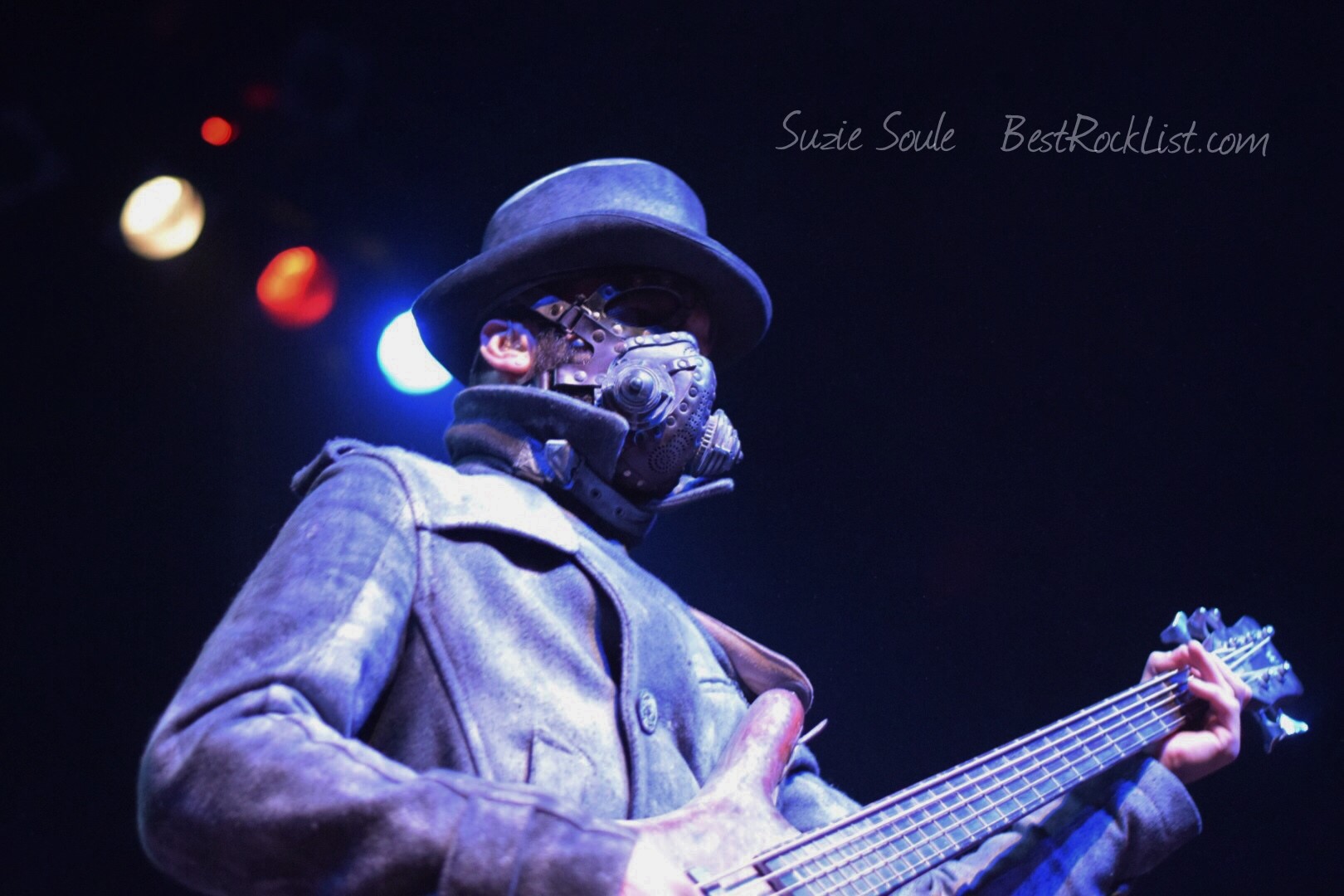 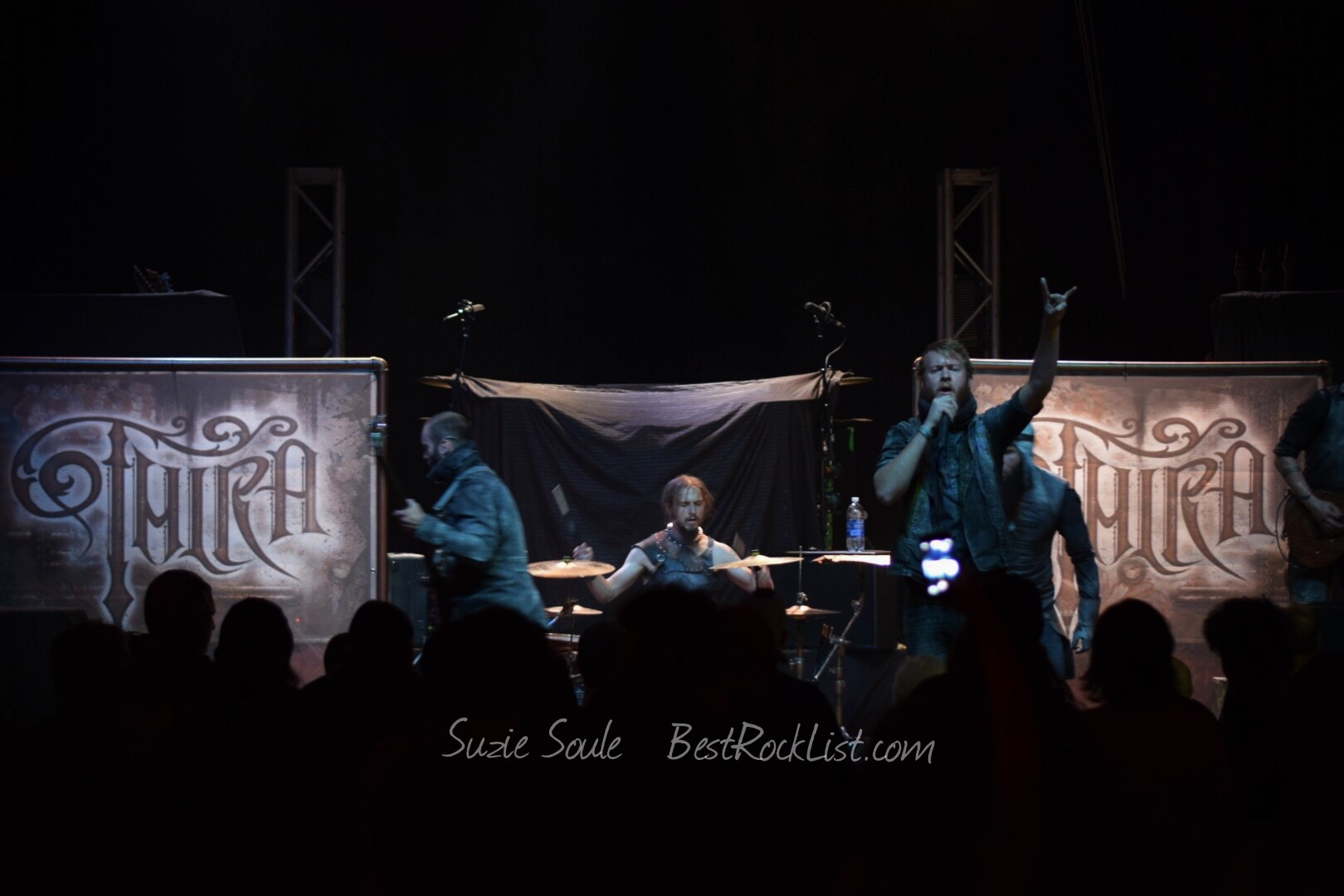 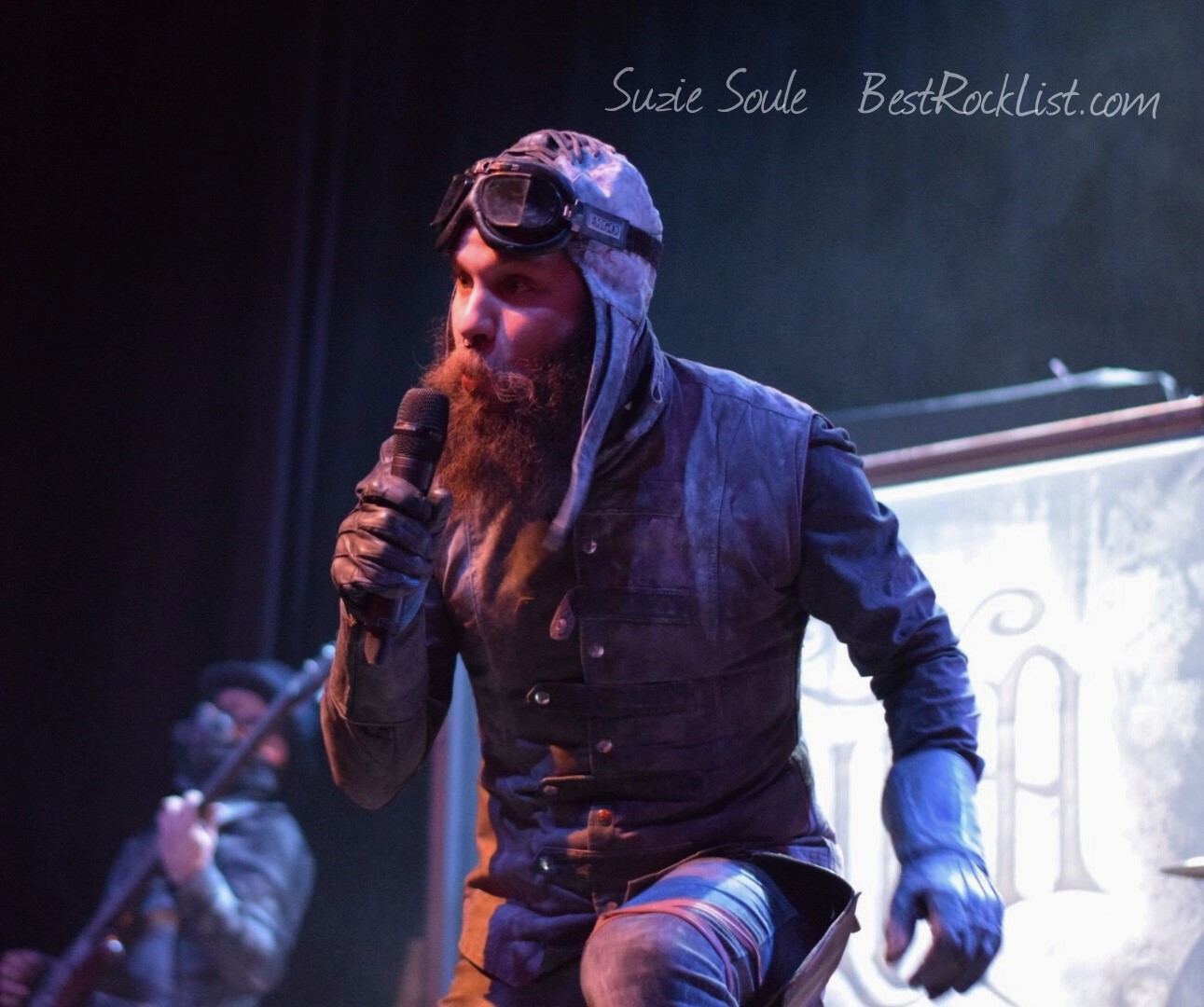 The band Unsaid Fate was along the lines of hard rock. Female fronted by a thin young woman whose voice has power that is deceiving of her diminutive size. Jackie LaPonza came out looking like a rapper with ball cap pulled low, a half shirt with Wolverine, and Spiderman leggings. She is also the fiancée of Skinny from Mushroomhead and is a guest vocalist on Mushroomhead’s album. Their set appealed to the mainstream rockers in the crowd. “Always” was a song paying homage to loved ones we have all lost. They performed a cover of “Killing In The Name” by Rage Against The Machine.  You cannot go wrong with such a great song and it was a respectable cover.

Erimha is a black metal band and were the hardest of the bands of the evening. They finally got the pit going for the first time that evening. Their style was one of decay and darkness. The vocalist, Gore, wore an animal skull on his chest. I was unsure of the actual origin of the animal but assumed it was a squirrel or similar sized animal.  Their name means “army” or “legion” in Sumerian culture. 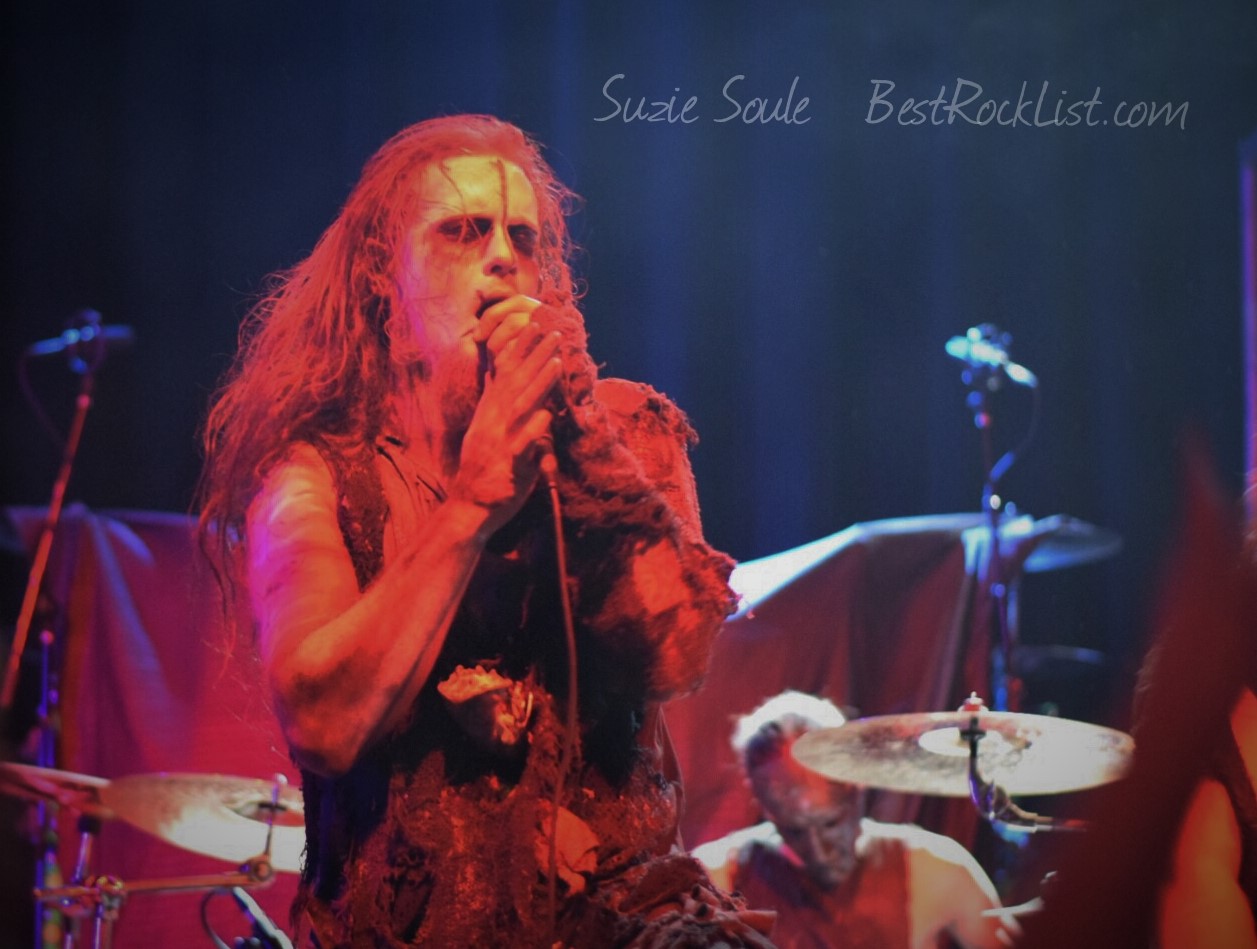 Mushroomhead is the most underrated band in metal right now.  Their live show always amazes their fans and the friends brought along to the shows.  Out of all the live shows I saw this year, this show was in the top two.  That is out of shows like Slayer, Judas Priest, Korn, Five Finger Death Punch, and Avenged Sevenfold.  The band was out on Rockstar’s Mayhem Festival this summer and wowed the crowds there.

The stage at The Castle Theatre is small.  The band surprisingly fit quite nicely on the stage considering there are nine members.  That was a feat of intricate placement of every member.  Mushroomhead wears amazing masks during their shows.  This tour the masks are neon and black lights make them glow.  In addition to masks,  the members painted themselves with neon paint. The band is also known for performing with water drums.

The evening started right out of the gate with their hit song “Qwerty”.  The band has three vocalists and they compliment each other so well.  When they performed “We Are The Truth”, Jackie LaPonza, of Unsaid Fate joined them onstage.  That is the track where she guests on their album The Righteous and The Butterfly.  Waylon did some crowd surfing for fun.  Many of their fans had driven many miles to see them and planned on driving more to see them at other venues.  The band keeps every tour fresh with new masks and props.  I cannot wait to see them again. 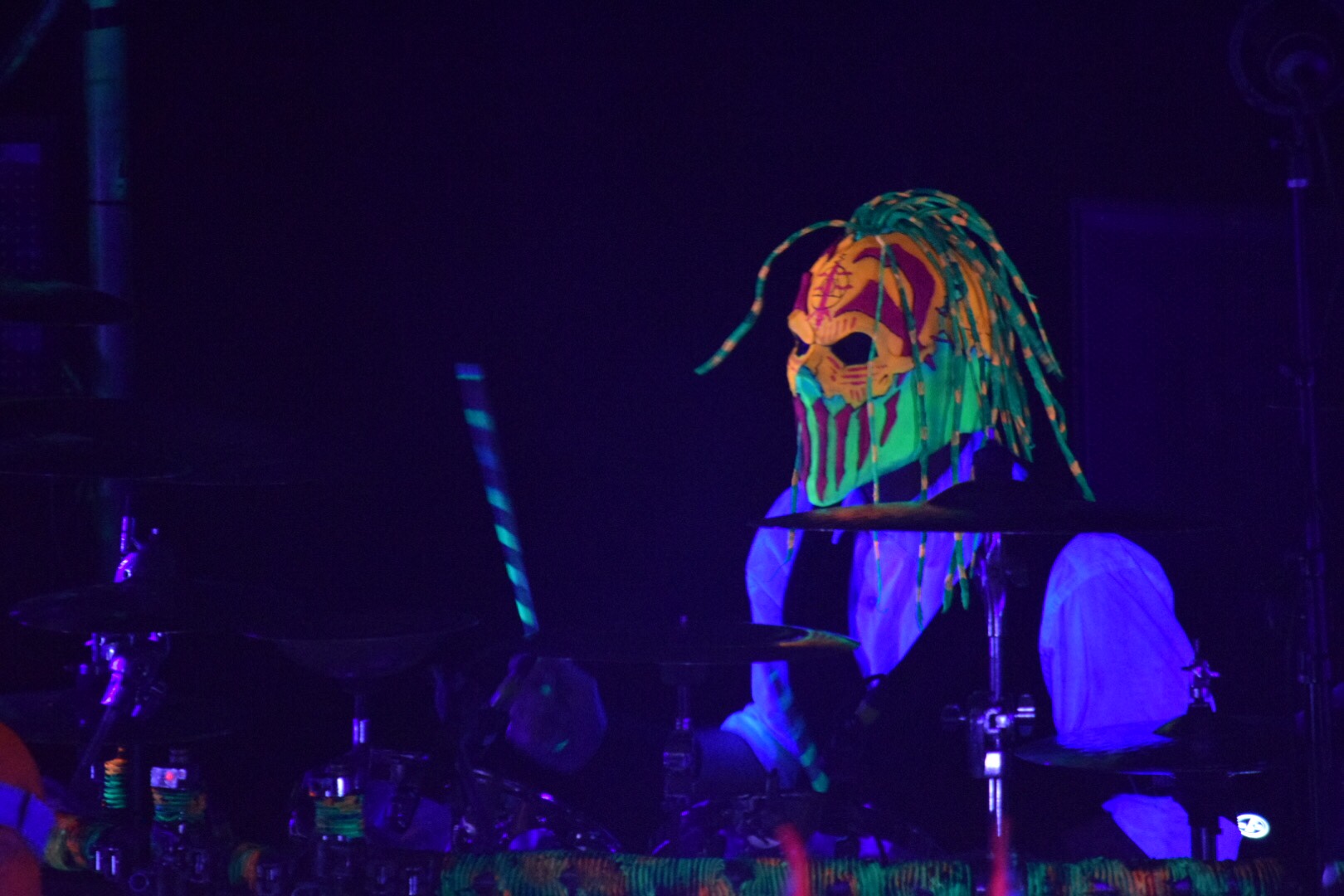