Interview with Eric Vanlerberghe of I Prevail

Suzie Soule of Best Rock List sat down with vocalist, Eric Vanlerberghe of I Prevail.  I Prevail published a cover version of Taylor Swift’s “Blank Space” on YouTube on December 1, 2014.  Since then, it has been viewed over 12.5 million times as of print date.  The song has reached #1 on iTunes rock chart.  It was on Sirius XM Octane’s Big ‘Uns countdown for several weeks.  Now, it is gaining radio airplay nationwide.  The song has fast forwarded the band to their first step of dream life status after signing with a label, Fearless Records.  Eric Vanlerberghe was working his day job in January of 2015 at IHOP.   Less than six months later, they are headlining a tour, talking to fans who know all the words to their Heart vs. Mind EP and giving interviews to the press.

Best Rock List (BRL):  You have had 12.5 million views of “Blank Space” video. Congratulations on all your success so far. You basically had overnight success.

Eric Vanlerberghe:  It was crazy! I never thought…

BRL:  Do you ever pinch yourself and wonder if you are dreaming?

Eric Vanlerberghe:  Oh every morning, I wake up in a new city and have to pinch myself and make sure. Yeah, this a city I’ve never been in before, about to play in front of a hundred kids or three hundred kids or more. Yeah. It is a dream come true.

Eric Vanlerberghe:  As of now, up to this date, it’s our hometown show. It was our third show on tour and our first as I Prevail. Eleven hundred kids sold out at our big venue back home. That was our biggest one. That was awesome!

BRL:  Well you guys are definitely on the scene and tremendously successful. I think of how much your video has gone viral and how successful you’ve become. Where are you guys from?

Eric Vanlerberghe:  We are from Detroit area. About thirty minutes north of Detroit.

BRL:  Did you guys know each other before forming the band?

Eric Vanlerberghe:  No. Actually Steve (Menoian) and Brian (Burkheiser) met each other online. On some social media site that you can meet members of bands. Brian’s old band’s drummer was dating someone that I played college baseball with and knew I was looking for a band. And they met me. We found Lee (Runestad) on YouTube doing drum covers and we were like, “Wow, this kid’s good. Holy shit! He lives in Michigan! Let’s pick him up too.”
And then the other two touring members, our bassist, Tony (Camposeo) is a good friend of mine from back in the local Michigan scene. Dylan (Bowman), our other touring guitarist, our producer produced one of his old bands. So that is how we met. So we didn’t know each other until we started playing music together.

BRL:  How did your band come up with the name, I Prevail?

Eric Vanlerberghe:  With bands and their band names, you can usually get a feel for what kind of music they play and what they sound like off the bat. Like Suicide Silence, you wouldn’t just think they were a pop band. Megadeth, you don’t think they’re a pop band or a radio rock band. So we wanted a name that, right off the git-go, you hear and you kind of know that we have positive vibes in music. And being from Detroit, Michigan, you know Michigan’s economy and the area, people already have kind of preconceived notion that it’s not the greatest area to grow up in. There’s nothing really good that comes from Detroit or Michigan, southeast Michigan but we want to change people’s opinions. Because we come out with positive music and such. That right off the beginning, we want people to have a preconceived notion of us.
So we were sitting and thinking…well…really quick what gets some people’s attention that you’re coming out with something positive. I prevail…I overcome…whoa! How about that? How about I Prevail? You’re prevailing, you’re overcoming the stereotype. You’re overcoming anything really, a positive mentality.

BRL:  That’s good. Yeah, all your songs are pretty positive.

Eric Vanlerberghe:  Yeah, even our heavy one, “Face Your Demons”, is. It deals with a pretty heavy subject of rape and abuse. It tries to put a positive outlook on the whole negative situation.

BRL:  And moving forward and facing those issues.

BRL:  You have released the Heart vs. Mind EP which is phenomenal.

BRL:  What I I recognized is the production of it is just great.

BRL:  What can you tell me about the producer?

Eric Vanlerberghe:  B.J. Perry of Wall of Sound Studio. He is a guy who just writes music for a living. He writes for Fox, UFC Fight Night, and MTV and all that. He is a good friend of ours and went in there to record. He knows what he’s doing when it comes to music. But the funny thing is, you’d never know it was a studio. It is a little basement in a little house in a small farm town out in Michigan. He is very knowledgeable at what he does. That’s B.J. Perry at Wall of Sound.

BRL:  Yeah. Some producers are like that though because really it is what your ear hears.

BRL:  Will your next album be produced by him?

Eric Vanlerberghe:  Yes. We’ll actually working with him right now. Not sure who it will be mixed and mastered by but we are working with B.J. Perry right now writing and recording our next album.

BRL:  That’s good. It is always good to have a cohesive sound when you’re putting out a sophomore or actually, it’d be a full length?

Eric Vanlerberghe:  That’s what we aiming for.

BRL:  Okay. Let’s delve into some of the tracks on this EP. “Love, Lust and Liars” is getting a lot of airplay on Sirius XM Octane now. Was there a particular person who inspired that song?

Eric Vanlerberghe:  Um. We each had our own person. The best way to describe our writing process for the EP was each day, we’d come in looking to write the next song. So we’d go into the studio and we are going to write a new song. We’d bounce ideas off each other. What are we feeling? We’d either start writing lyrics. Brian and I would come with lyrics, you know. Or we’d have a little bit of a riff or a drum track that Steve or Lee were working on and we’d get the vibe for how we’re feeling and then say “Love, Lust, and Liars” is the first one we kind of all bounced off stories about. Like how a certain girl in our life screwed us over and Brian came back with some lyrics. We bounced it back and forth about how this one girl in each of our lives just really got in there and ruined our lives. That’s why I think the song works so well is that it was influenced by a personal story but it can relate to each one of us in the band. We put on our own little influence in there. That’s why I think it works well with listeners, they can get their own story.

BRL:  Right, the fans can relate to the songs as well. Who does the lyric writing?

Eric Vanlerberghe:  Brian and I do a lot of the lyric writing but we take in from everyone. All four of us throw in the pot there.

BRL:  So when you’re writing. All of you are writing together.

Eric Vanlerberghe:  Yep. We all sit down and it’s usually in the same room. We all sit down and start writing. Sometimes, Steve will come in with a guitar riff. I’ll come in with a couple of lines of to some lyrics. I like to write poetry and stuff so I’ll bring some old stuff that I wrote in. Brian’s very good at writing melodies and hooks. So he’ll come in with, ‘Hey, I’ve got a real good melody’. Lee will have some drum parts mapped out in my head or vice versa. ‘Hey, I’ve got this guitar part in my head. Steve you want to track it real quick?’ So we all work together. We all have our own talents but we all kind of throw in the pot together.

BRL:  Okay, you guys are from Michigan. What kind of music did you listen to growing up?

Eric Vanlerberghe:  Me, personally, it changed dramatically. My dad listened to a lot of Led Zeppelin and classic rock like that.  And that’s what I grew up listening to.  And I had my little rap phase for a couple of years, 50 Cent “Get Rich or Die Tryin’” was the first cd I ever purchased. But growing up, I got into Emo, Pop, stuff like that. Then it got heavier. Now I listen to Beatdown, Hardcore, or Metal. But I also listen to a lot of like, now this is weird, other side of the world, Spoken Word and poetry. La Dispute and Listen are two bands that I really, really enjoy. But that is where I get influence from writing. That’s what I grew up listening to.

BRL:  Yeah. Those are all good. Poetry is always good when you’re writing lyrics. You’ve said that you would love to tour with some of the bands that you love. So, bands like A Day To Remember, Bring Me The Horizon, We Came As Romans.  Now, We Came As Romans is from your area so do you guys know each other?

Eric Vanlerberghe:  No. I grew up going to see them all the time when I was younger. When they put out their first album, I went and saw their cd release show back in Mount Clemens (Michigan). I don’t know them personally. I’ve seen them around town and stuff. It’s cool saying we come from the same city, same town. Same as Chiodos and I See Stars but trying to the next band to come out. It’s awesome to follow in their footsteps. It would be awesome to tour with those bands, A Day To Remember, especially, and Bring Me The Horizon would be really cool.

BRL:  Okay, so you guys on tour over the summer. We’ll follow your tour on your social media. Then, what are your plans after that?

Eric Vanlerberghe:  Well, we have a couple of weeks off after this tour to go back and write in the studio. We have a big fall tour planned. We cannot announce anything yet. It’s going to be one hell of a tour.

BRL:  Hmm. Is it a headlining tour or not? (I am trying to get as much information as possible.)

Eric Vanlerberghe:  The only thing I can say is that it’s not a headlining tour. That’s all I can say. Don’t twist my arm anymore because I will get in trouble. But it’s going to be a blast. It’s going to be an amazing tour.

BRL:  Okay, we’ll look forward to that. Thank for you taking the time to talk to me.

Be sure to catch the Crossroads Tour.  With the rate of their success, I Prevail, will be selling arena shows before you know it.  You can say you saw them way back when.

Vocalist Mikey Carvajal talks to Best Rock List and tells us who he wants to collaborate with on their next album. You might be surprised to hear who it is.

Find all their social media here: 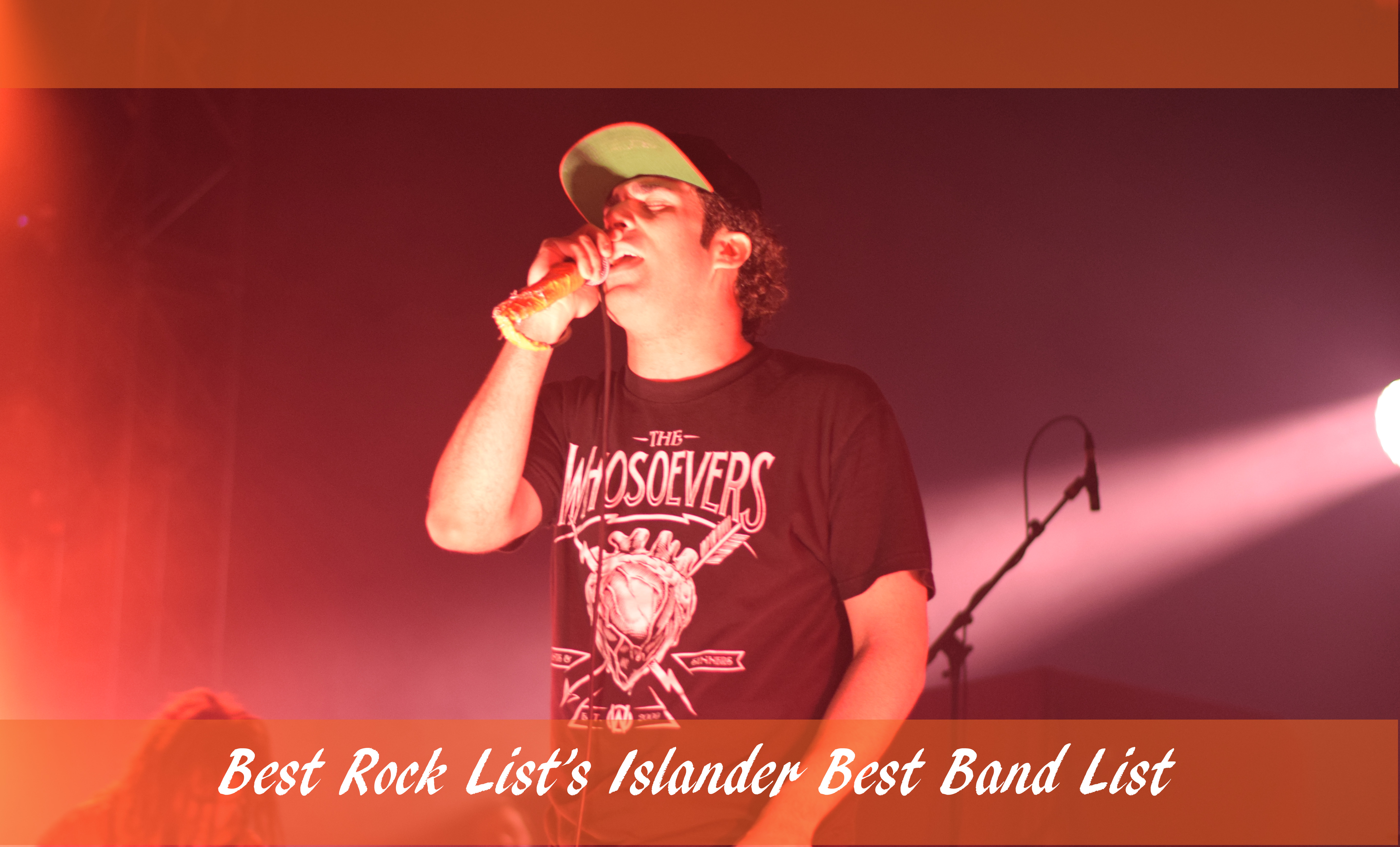 Sebastian Bach and his band are touring in support of his newest album “Give Em Hell” which is a metal album that reminds us of the energy of Skid Row. His vocal skills are improving with use. He tells what helped him to hone his skills to use his voice more. We also asked him about his background and got some insight into what bands he grew up on.