Avatar returned to the historic Castle Theatre in Bloomington, Illinois. They were joined by Gemini Syndrome and First Decree. Huntress was supposed to be on the tour but frontwoman, Jill Janus, was recuperating from major surgery. You can read the full statement here about their schedule changes. Huntress Touring Schedule Changes

After a break from relentless touring, Gemini Syndrome hit the road again after the release of their single “Eternity”. “Eternity” is the first single off their sophomore album Memento Mori. We talked with Aaron Nordstrom and Alessandro AP Paveri about the new album, demystifying Albinism, and what music they love from the classics to modern bands. Watch the interview here:

First Decree is a rock band from Cheyenne, Wyoming and they have been touring nonstop and hitting the stage with everyone from In This Moment to Pop Evil and now Avatar. The band is hard-working and really heartfelt in their delivery however the music just does not speak to me.

Gemini Syndrome returned to the stage after the release of their newest single “Eternity” and while the sound is familiar, the song is a new chapter of their story. I know the fans were very excited to see Gemini Syndrome and Aaron Nordstrom exclaimed several times that he was happy to be back as well. Gemini Syndrome performed “Pleasure and Pain”, “Mourning Star” (You can find out more backstory about Mourning Star in our interview.), “Stardust”, “Basement” to name a few of the songs. Their energy is both dark and hopeful at the same time. Aaron Nordstrom’s voice is rich and powerful with the melody and screaming in their music. 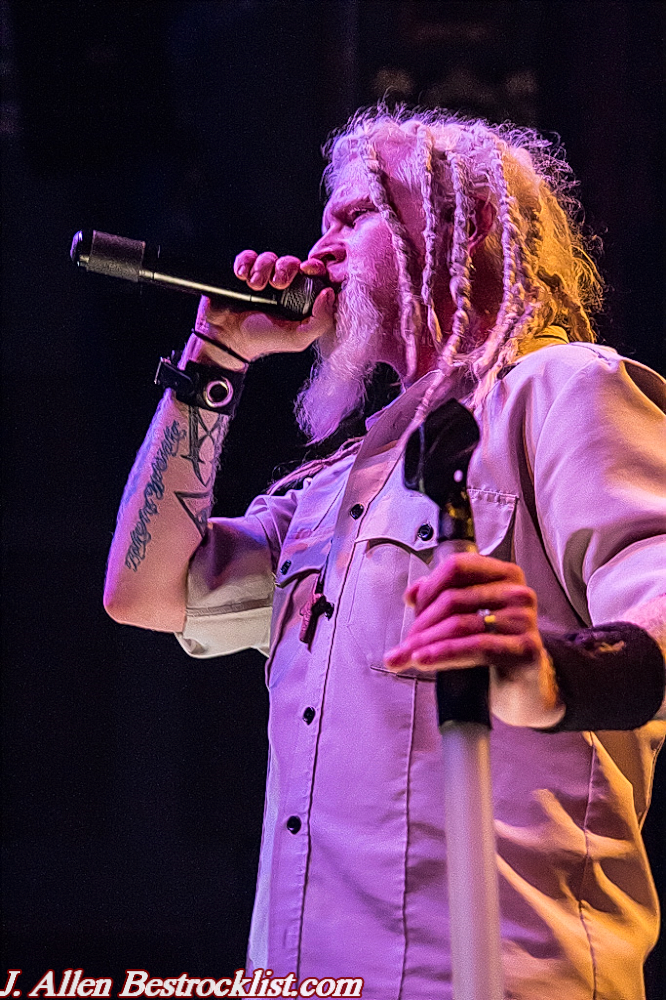 Avatar’s stage was covered by a pretty large, black cage right in the middle and the crowd was wondering exactly what was behind the cage. Well, when the circus helpers opened the cage, there stood Johannes Eckerström standing about thirteen feet in the air in a huge jacket spanning the stage singing. The rest of the band were hidden initially as Johannes sang “Queen of Blades”. Avatar was spelled out in lighted letters going across the stage and there was also a long shadow in the background with Avatar spelled out. For this elaborate of a set in such an intimate venue was f*cking awesome! I have been to around a hundred shows here and this was the best show at The Castle Theatre. The fans were all rapt with attention to this show. The band has their headbanging coordinated to such an extent that their hair is all flying up at the same time. Avatar is one of those bands that get better every time you see them. Their art is being honed to the level of world class metal stars. Johannes Eckerström’s vocal range is unrivaled and his falsetto scream has matured over the years to a mellifluous thing of beauty.

Johannes Eckerström told the crowd that you did not need your neck muscles tomorrow so use them tonight and bang your head with them. I did and so many metalheads in the crowd did also. My neck and back were sore for two days after the show. I lost my voice from singing(screaming) along and only suffered from a slight case of tinnitus. So, just to reiterate, it was the best show I have ever seen at The Castle Theatre.

You can still catch a few more dates on this tour: