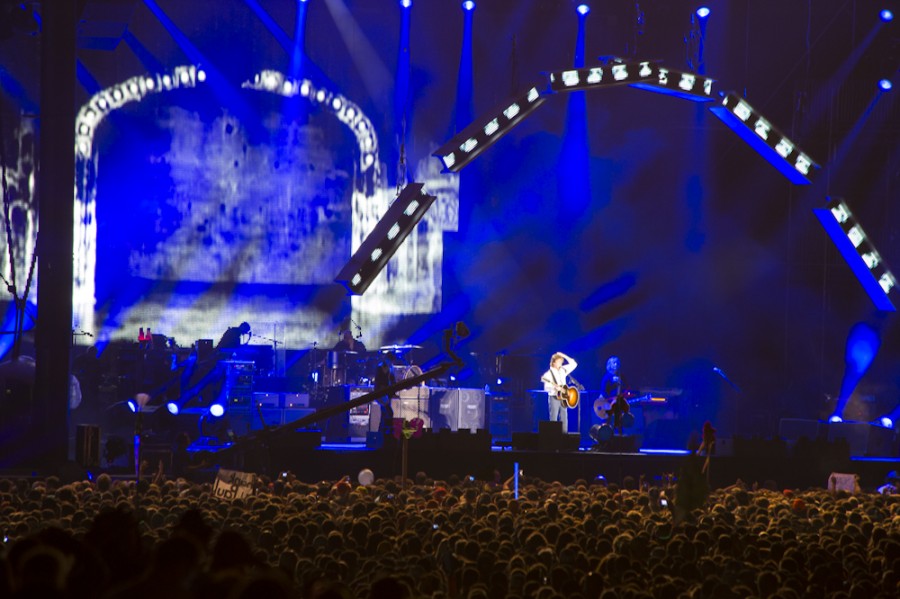 Bonnaroo has one of the most diverse lineups of any of the major festivals. The beauty of this festival comes from the eclectic crowds; metal heads two-stepping to Edward Sharpe and the Magnetic Zeros, Hippies taking in a midnight hip-hop Superjam and Swans being heard by everyone at the festival because of how loud their tent (or more accurately This Tent) was. That culture of beauty and acceptance, and the embrace of diversity is what makes Bonnaroo great, and there were five shows in 2013 which perfectly describe the experience.

While officially touring their collaboration album Love This Giant, a brassy artistic deviance from both artists familiar sound but with familiar lyrical concepts this set was definitely made for a Bonnaroo crowd. Being split equally between both artists other endeavors including a sing along of Naïve Melody and a thoroughly rocking rendition of Cheerleader this set drew in the old with the new. Add into that Byrne’s bizarre choreography, including but not limited to karate fights between Byrne and Annie Clark’s guitar and a Madonna-esc “Vogue” move and you have a delightfully weird Bonnaroo set.

Jim James and Bonnaroo go together like America and Apple pie. The My Morning Jacket front man has had a standing report with the festival’s audiences for many years, so when he teamed up with John Oates to play a midnight collaboration set no one expected less than greatness. Having Larry Graham of Sly and the Family Stone and a Sly heavy set did not hurt either. If this super-group reminded us of anything it was that we were all there to have some Hot Fun in the Summertime. While playing through some fantastic soul staples the party got even better when R. Kelly popped over from his show to sing the crowd a little Sam Cooke, only to be followed by Billy Idol unexpectedly bringing in the T. Rex classic “Bang a Gong”. Superjams are what this festival was built on and every year they remind us of just how much great music comes together for this magical weekend.

Playing to the Sunday afternoon crowd at the What Stage, many came in to the set expecting the Thrift Shop start to put on a trendy fresh hip hop set. Many did not expect, however, for him to finish up his chart topping single only to immediately go into an in-depth explanation of what he believes is the greatest civil rights battle of our time, and when he called for a finger to the sky from everybody who believed in the equality of love, the show of support throughout the entire sea of fans at the main stage could not help but bring tears to many eyes and cheers from many mouths. The embrace of love, peace and equality is what brings together everyone at Bonnaroo and this moment within this set perfectly illustrates how crucial that is to the festival.

Common sense tells us that nothing good happens after 2 a.m. Bonnaroo consistently reminds us that common sense is to be left at home and Animal Collectives raucous late night party proved to be one of the best shows of 2013. The introduction was performed by the famous human sound technician Michael Winslow which only provided a good foundation of weird for the bands electronic psychedelic vibe to build off of.  Touching on all areas of their repertoire and ending with a lengthy and perfectly awesome version of “Brother Sport” leading into “The Purple Bottle”, Animal Collective provided the perfect escape for those of us who could quite down from…

If there was any set that could define the spirit of 2013’s Bonnaroo it was the former Beatle Macca himself. After Friday night when you were talking with your neighbors on the campsite or strangers in Centeroo the common question was “what was your favorite set so far, besides Paul McCartney?” and rightfully so. Sure he’s been touring for so many years that it would be hard not to have it perfected but between beloved Beatles tunes like “I Want to Hold Your Hand”, fantastic Wings songs that were well received by the crowd, and wonderful little asides like Sir Paul recalling one time Jimi Hendrix covered Sgt. Peppers with Eric Clapton in the crowd, McCartney knows how to draw in and hold an audience. The most beautiful Bonnaroo moment of the whole year however had to be when 80 thousand concert goers all got to sing the “nana na nas” in “Hey Jude” together with the man himself.