On July 14th, 2015 Powerman 5000 would invade The Leeway in Pekin Illinois with co-headliner Soil. Also on the bill for the night would be Clippoint, Another Lost Year, and Three Years Hollow. Going into this show I didnt really know what to expect as this would be my first time photographing not only the majority of the bands on the bill but also the first time photographing at The Leeway. The Leeway is essentially a bar big enough to put a stage and some lighting in. Thats not a knock on The Leeway though because despite the fact that it dosent look very big on the outside it was very spacious inside. Getting a drink at the bar wasn’t a issue and you could see the stage from there so even if you had to wait in line you could still enjoy the show while doing so.

Opening the night would be Clippoint. Clippoint is a local band out of Morton Illinois and consists of Aaron Mitchell on vocals, Billy Akers on guitar, Travis Collins on drums, and Caleb Mooney on bass who’s support of the St Louis Blues is evident as his bass guitar features the Blues Logo. While Clippoint is a local band they have opened for Finger Eleven, P.O.D, Eyes Set To Kill, and now Powerman 5000 and Soil. They currently have a 5 song EP out that you can pick up at their shows. The highlight of their set was a rendition of Rage Against The Machine’s Bulls On Parade. It was spot on and Akers’ solos were phenomenal. If your live in the Peoria/Morton area check out Clippoint at one of their many local shows.

Next up would be Another Lost Year. Another Lost Year of ALY is a nationally touring quartet out of Charlotte North Carolina. The band consists of Clinton Cunanan on vocals, Adam Hall on bass, Nathan Walker on drums and Jorge Sotomarino on guitar. This would be my first time seeing ALY and i enjoyed their set. Their sound reminded me alot of another band that would play after them in 3 Years Hollow. ALY is best known for their hit songs Writting On The Wall and War On The Inside, both of which spent quite a bit of time at #1 on iheartradio. War On The Inside, whose lyrics were influenced by Clinton Cunanan’s battle with drug addiction and the lose of his mom, also spent five weeks straight on Sirius XM’s station Octane Big UN’s weekly countdown. ALY released The Revolution: Pt. 1 The Other Side in 2014. If this band is in your area check them out, their cover of Keith Urbans song Cop Car is worth the price of admission alone.

Next to take the stage would be 3 Years Hollow from the Quad Cities which is about an hour and half up I-74. This band has been quite busy over the past year, having completed a stint on 2014’s Rockstar UPROAR Tour and then playing 2015’s Shiprocked Cruise. 3 Years Hollow has recently gone through some lineup changes as the band went on stage with mainstay vocalist Jose Uriquiza, guitarist Tony Reeves, and Neil Kuhlman. New to the group would be ex eye empire drummer Ryan Bennett who has replaced Chris Cushman. Missing from the group was bassist Dex Digga and while they haven’t found a replacement for him yet his parts are being played by the bands IPad, which Jose introduced when introducing the band to the crowd. This would be my fourth time seeing 3 Years Hollow and despite the lineup changes the band still sounded better then ever. 3 Years Hollow is touring in support of their major label release The Cracks that was released last year and was produced by Sevendust’s Clint Lowry. The album has made 3 Years Hollow major players in todays Hard rock scene as they have toured with the likes of Papa Roach, In This Moment, P.O.D, Pop Evil and Buckcherry. They have enjoyed heavy rotation on Sirius XM’s radio station Octane thanks to the singles Remember and Chemical Ride. Having played in this area several times over the past few years they were greeted with a loud ovation as many in attendance would sing along to the majority of their set. There isn’t much else to say about 3 Years Hollow besides that they kill it every time they hit the stage. Even without a bassist and a new drummer they didn’t miss a beat and sounded better then ever.

Next up would be the Co-Headliner for the evening, SOiL. This hard hitting nu metal rock band was formed in 1997 some 158 miles away in the great city of Chicago Illinois. SOiL would be the first rock band ever signed to J Records when they were signed the label and released their debut album Scars back in 2001. The group consists of Adam Zadel on guitar, Tim King on bass, Mitch Gable on drums and Ryan McCombs on vocals. Soil would explode on to the stage with the song Loaded Gun and would continue their assault throughout their entire nine song set. A set that would see vocalist Ryan McCombs leaving the stage and singing the song Halo out among the fans. Their set would consist of the aforementioned Loaded Gun as well as other well known SOiL songs Breaking Me Down, Pride, Halo and my personal favorite The Hate Song. They would also did a phenomenal cover of Ran Jam’s Black Betty. The guitars were at a 11 but didn’t overpower Ryan McCombs raspy voice during their roughly 45 minute set. Sometimes you never know what you’re going to get when you hear a band live for the first time but I was very impressed both with the way they sounded and their overall set as a whole as these rock music veterans put on one hell of a show. SOiL’s latest album Whole is available through ITunes, Google Play, and Spotify. It features 11 hard hitting rock songs that will have you hitting the repeat button when its over. 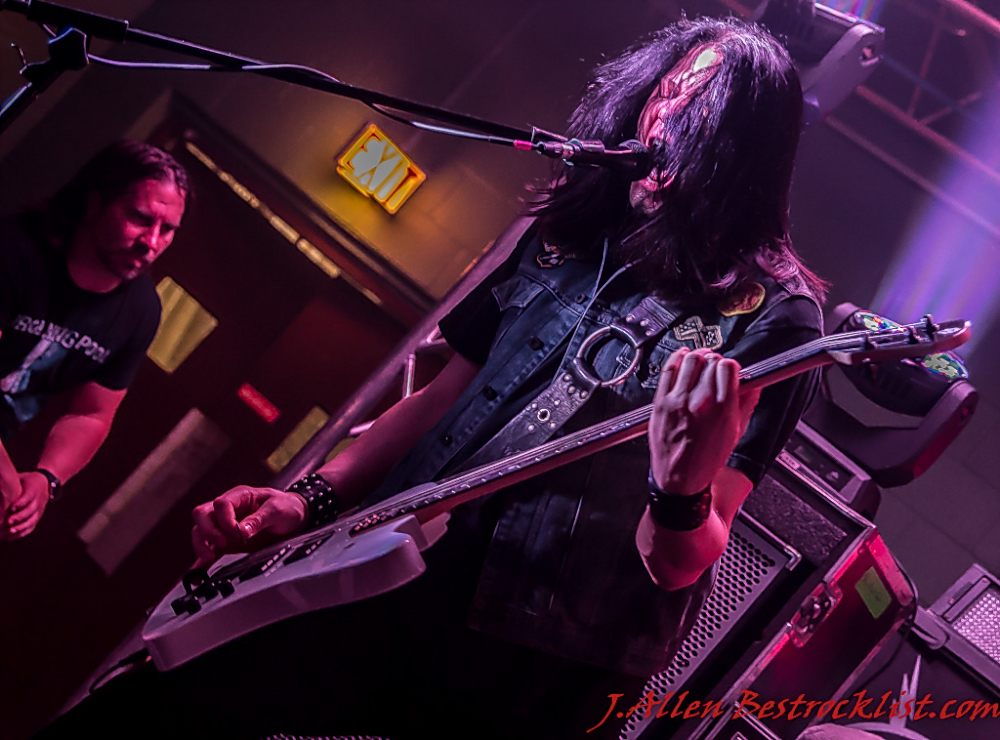 Next up would be the final performance of the evening, Powerman 5000, and what a performance it would be. With the venue only being illuminated by bar and merchandise table lights Powerman would take the stage with green laser lights attached to their instruments making for a great light show and the Powerman 5000 Logo glowing from the chestplates of their stage outfits. They would open their set with Super Villian as the crowd jumped up and down to the infectious beat. Powerman 5000 consists of DJ Ratten on drums, Murv Douglas on bass, Nick Quijano and Richard Jazmin on guitar and Spider One on vocals. If someone asked me to sum up a Powerman 5000 show I would have to say organized chaos. From the moment they hit the stage Spider One is all over the place and I dont believe he stood still longer then five seconds during their 12 song set. He has a unreal energy level that only seems to get higher and higher as their set goes on. Their set would cover songs from their most successful record Tonight The Stars Revolt to their most recent release, 2014’s Builders Of The Future. Besides the obvious choices of Bombshell, Super Nova Goes Pop, Nobody’s Real, and When Worlds Collide, the set would also include new songs Invade, Destroy, Repeat, We Want It All, and I Can’t Fucking Hear You all of which are off the aforementioned album Builders Of The Future. Spider One controls the stage much like another rock icon who just happens to be his older brother, Rob Zombie. Like Rob, Spider One leaves it all on the stage and puts alot and energy and effort into their sets. If you like great guitar riffs, thumping bass you can jump up and down to, hard hitting drums, and a lead vocalist with unrelenting energy then make sure you catch Powerman 5000 whenever they play in a city near you. 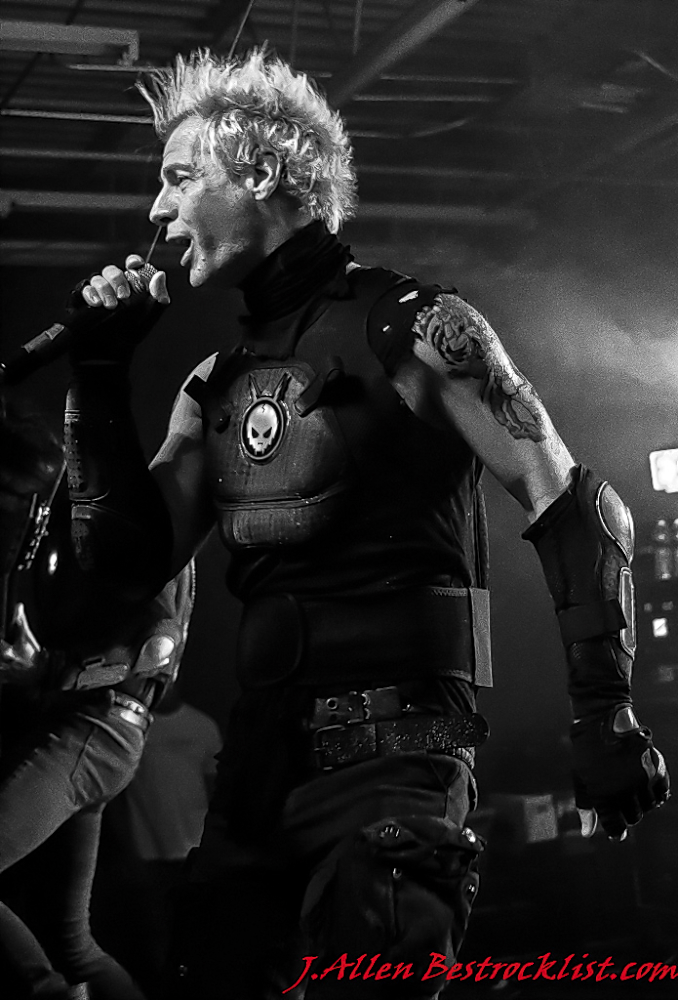