In This Moment (ITM) are on tour supporting their latest album Black Widow that was released November 17, 2014. In This Moment was formed in 2005 by Maria Brink and Chris Howorth. They are the new metalcore band with metal growls and melodic singing accompanied by guitars, heavy drums along with electronic programming.

First Decree opened the evening. The band is a solid rock band from Cheyenne, Wyoming. Vocalist, Travis James, had a great rapport with the audience. The band is poised to release their sophomore album, This is Our Rise on August 21st.

The Defiled is a metal band from England and there is no question that they are heavy metal. The Defiled is the very first band to play on a free floating iceberg in September 2014. You can watch the iceberg performance here:

The Defiled on an Iceberg

The Defiled kept the music heavy for this evening. They started with “As I Drown” of which the chorus expands on the support they received

“And I have tried my hardest, But you, have beat me down, ‘Cause its the same old situation, Pouring, water as I drown. Walking in wind-driven rain, Tangled in a blanket of your lies, You’re fucking killing me”.

They used the words “f*ck” and “motherf*ckers” gratuitously throughout their set. The AVD was throwing his keyboard like a frisbee into the air and catching it easily. The Defiled encouraged a circle pit and the crowd complied.

Stitch D of The Defiled

36 Crazyfists performed next. 36 Crazyfists is a metalcore band from Anchorage, Alaska that formed way back in 1994. They are the heart of American metal bands. These guys have been around for a long time and toured extensively. They just released their seventh album Time and Trauma. You can purchase it on their website here.  The vocalist, Brock Lindow, was looked a bit like a fisherman in a Speedmetal black t-shirt and a stocking cap. 36 Crazyfists put on a killer, high-energy show. Their setlist consisted of “I’ll Go Until My Heart Stops”, “Bloodwork”, new song “Time and Trauma” and crowd favorite, “Slit Wrist Theory”. It was my first time seeing 36 Crazyfists live and I can tell you I will make a point to see them again. I would suggest you do the same.

The anticipation began to build with Black Widow spider legs on a white fabric screen blocking the view of the stage. The crowd waited for the stage to be set up behind the screen. The stage set included lighted steps, metal gates and a tent for costume changes. Drummer, Tom Hane’s kit was stage right and up above the rest of the band. The bassist, Travis Johnson, was Tom’s complement on the left side. The lower areas on each side of the main area left room for guitarists, Chris Howorth, and Randy Weitzel. 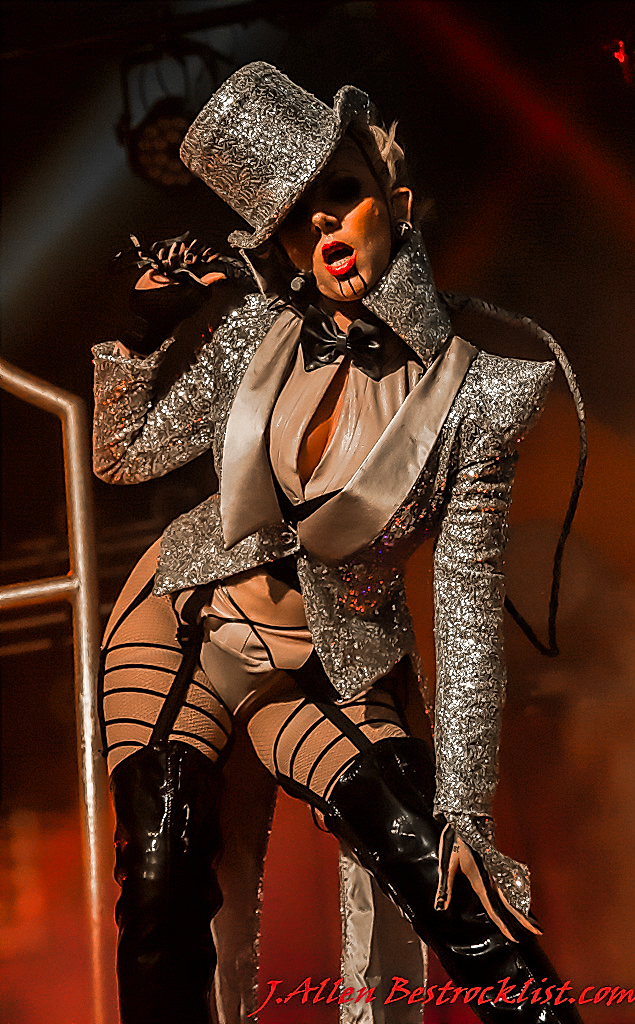 In This Moment encourages their fans to #becometheshow and dress up for the show and many fans do just that. There is a background screen set up at every venue for the fans to snap pictures and send to the band’s social media.

In This Moment’s performance is a seamless, theatrical vision with costume changes where the songs flow into one another. ITM’s set began with “Sick Like Me”. Fans and smoke blew around hair and also added to the song “Burn” where vocalist, Maria Brink, used large black, fabric wings to perform. Accompanying Maria Brink and sometimes attached to each of her legs were her backup dancers known as the Blood Girls. The stage had back-lighting that concentrated the crowd’s view of Maria Brink’s hourglass figure.  A new costume added to In This Moment’s tour was a circus tamer with whip.  Maria using the whip definitely got the audience excited.

One of the most important gestures that the band executes in every show is to thank the fans. Maria tells them, “Thanks you for taking time, hard earned money, and thank you from the bottom of our hearts.” Her gratitude is sincere and the fans appreciate it. (Especially after standing in a two foot by two foot square for over four hours.)

Maria Brink told the audience that “Whore” was a “Go f*ck yourself to those that think they know who you are.” She asked the crowd to turn hate into love and turned the message from one of negativity into one of positivity as the song does by changing the stigma of “whore” into a positive connotation.

At the end of the evening, the crowd called for an encore and of course, the only song for an encore is “Blood”. Maria Brink asked the audience to chant “We want blood!” before it could be performed.

You can find out where here:

@therealjeremymckinnon of @adtr in Peoria, Illinoi

Set times for this awesome festival! Check back f